We all cheered with the host as he asked us to count the last 10 seconds with him. I made the sign of the Cross and made the same prayer I’ve been praying the whole week before: “Please God help me finish this race safely….”

“….And if you can squeeze in a sub-5 finish for me, that would really be great. Amen!”

And we were off.

The first section of the course was within BGC. I’ve been familiar with this route, except for 8th Avenue which I believe is the first time this road has been used for races (do correct me if I’m wrong). But I was still able to run the said road in several BGC long runs I’ve scheduled 4-5 weeks before the race. Thus, it’s safe to say that during this part of the race, pace went according to plan. Km1 to 5 was done in 35mins or a little over 7:00/km pace.

I had the same condition after tackling the Kalayaan flyover and Buendia avenue, amidst the horn-hammering of drivers getting pissed off by the unfortunate traffic that they were in (sorry fellas). I took my first GU after km9 which was a little over an hour. Sips from the Gatorade bottle I was holding (aside from the Gatorade-packed Nathan 1.5 that I was wearing) served as my hydration. I would eventually take 4 more GUs (one packet every hour).

I felt excited as I ran over the railroad tracks and turned left. For just above me, the Skyway which I will now fondly call as The Beast, waited for battle. I ran the 2010 edition of the Condura 21km and I still felt the same excitement as I ran up the Buendia ramp. As my family and I were frequenting my parents’ place every Sunday, there would be times that I would take any chance I get to drive the Skyway to observe the rise and fall of the elevation. I actually made the whole Skyway trip from Sucat to Magallanes exit just after the New Year (Toll fees were lifted during that time).

As it was still minutes past 4:30am, it still looked as though it were night as the Skyway lamp-posts lit our path. I didn’t recognize the man on the scooter at first when he said “Good morning runners!” until he passed me. Had I known it was RunRio head-huncho Rio dela Cruz, I would’ve greeted him back. Probably because of the helmet he was wearing that covered his patented Afro-locks made him unrecognizable in the dark.

The 42k runners had spread out by this time and it was getting rather lonely. But as I was approaching Magallanes it was a welcome sight to see the tail-end of the 21km runners. I made several hi’s, good luck’s, and fist pumps to friends I came across with there ---officemates and a highschool batchmate to be specific. Man, there were a lot of 21k runners! Would it be safe to say that the 21km is the new 10k?

As mentioned previously, my worry was bonking at the 3-hour mark. True enough, as I passed the Sucat turnaround and clocked 3:04 after km26, I started to slow down then after. Tried as I might to keep up with my target pace, I could only see the ave pace on my 305 dropping considerably. The mind can play tricks on you once you’re in this bonked state, forcing most athletes to go to the side and call it quits. But at that point I kept remembering my mantras. Love running! Don’t put to waste the 16 weeks of training you’ve done! But it was just not there. The most I could was run a sub-8:00 pace with my eyes closed for probably a km or so, trying to get my groove back.

By this time I was walking and running alternately, probably more of the former. I even had an idea that if I ran 6:30/km for the last 10k, a sub-5 would still be possible. I tried to pickup the pace, but my body, specifically my right calf muscle and left glute, would cramp in defiance. Cramping was something totally unheard of in my vocabulary until this race. It may have been the loss of continous electrolytes or the continous climbs and descents that The Beast presented, but I was definitely cramping. It would immediately subside once I succumbed to a walk or a gingerly-slow jog.

At this point I was glad to have set two goals for this race: an ideal sub-5:00 and an acceptable sub-5:30. Scrap the sub-5:00 I thought. There’ll be another day for that. I computed how I was doing in the last 6km pace-wise. A sub-5:30, or even a sub-5:20, was still possible! I was dousing myself with several cups of water at every aid station: on my head, my arms, my face. I was trying to keep myself as cool as possible even if the weather was still runner-friendly at that time (past 8am). I just felt the need to cool myself to keep me going. The banana at the Takbo.PH station really helped. I ran out of Gatorade by the 40km mark so I had to try the 100plus being served ---bleck! Sorry to 100plus fans out there, but I didn’t really like it.

I clocked in at 5:01:30 by km40. Just a little bit more, I said to myself. I couldn’t recall how the route was reflected on the racemap after trudging past the Kalayaan flyover. I was worried that what if the run (walk) from 32nd led all the way towards the end of BHS? That’s a slight uphill grade, but any uphill at this point was something that I didn’t need. Thankfully, I saw the runners ahead of me turning right at 9th Avenue.


A WARM WELCOME TO THE FINISH

I can’t exactly explain it, but after I made that final turn at 9th Avenue towards the finish arc, I had this wonderful feeling stirring up in me as I saw a huge crowd waiting on the sidelines. They were just standing/sitting there, as if been waiting for all of us marathoners to finish. Some were cheering, others were clapping as I made my way past them. “Good job!” said an unknown lady to me as I passed by while she sat in the sidewalk eating her breakfast. The clapping was just, man, wonderful! 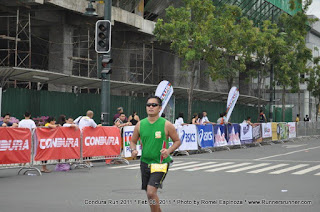 I was still at a slow jog at that point, but I felt obliged to give something back to the crowd by making a last push for the last 50meters. I tried, really, but the cramp on my right calf acted up again. I eventually stopped to a walk, and raised my arms in thanksgiving as I walked past the finish arc.

I had beaten my full-marathon PR by a whopping 30 minutes!


A LOT TO BE THANKFUL FOR

As I was recovering with my McDonalds reward meal: 2-piece chicken with rice, pineapple juice, and an apple pie, I couldn’t help but look out the condo’s window and see the Skyway, now being plied by buses and other vehicles, with utter amazement. Man, I just ran (and walked) the whole Skyway! A full-marathon to boot!

I have to admit that I’m partly disappointed on myself for not making a sub-5. But I’ll definitely take the 5:23. It’s still a (mighty good!) PR. 16 weeks of hard work really paid off, I guess.

The weather cooperated as well. I find myself extremely lucky for the weather that day since days after that, it seems summer has made an early entry to Manila.

I’m thankful to the Condura race committee for putting up such a great race. Except for the choice of 100plus as the sports drink, the hydration stations were setup beautifully. Water didn’t run out. Marshals were everywhere and took charge of vehicular traffic. The medal is so beautiful that I’m now thinking of looking for an engraver to put in my name and finish time at the back. The Condura Skyway Marathon is something that I’m not afraid to promote to my friends and readers to join should they consider running in a grade-A race.

Yes, count me in for the 2012 full-marathon edition. I want to battle The Beast again! 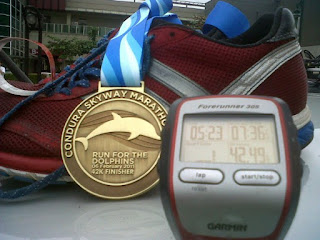