Again, the weather cooperated last Sunday morning just like in the Mizuno Run Time Trials. The sky was a grayish light-yellow when I hopped into my car at 5am to drive to UP for the MOVE Manila Run. The sun will be coming up today, I said to myself as I drove a little fast ---I had to be early since this was my first time to (a) race in UP (I don't know where to park except for the AS parking lot which was where the organizers/sponsors were located) and (b) do an onsite registration.
This run fits right smack into my current half-marathon training schedule so it was good that I was able to race again since my last race was July5 (company sportsfest 10k at Heritage Park).

I was able to park behind the AS(?) building. I did a warm up jog towards the start/finish line since I had to hurry to look for the registration booth at the AS parking lot.

Hay salamat, hindi mahaba pila sa pag-reg. I paid the P350.00 fee and got my racekit. The racekit was the standard waterproof (like Mizuno and Condura) but there was no tag with the barcode which signaled to me that this will be "low(er)-tech" in the timing once I cross the finish-line, a.k.a. cheap-timing, hehe. Good thing I had my stopwatch and Nokia-Tracker as my "unofficial timekeepers."

Unfortunately for us overweight runners, they ran out of size-XL so I had to settle with size-L which I might use sparingly at home (unless I want to look like Tonette Macho in public, hehe). I jogged back to the car to put back the envelope and the singlet...and then jogged back to the starting line. Whew!

The yellow start/finish inflatable arc deflated twice before it was finally managed. Akala ko we had to traverse it as our first obstacle. There was the usual warm-up exercises, a short prayer, and oath-taking. A few minutes past 6am, the gun blasted off for the 10k race.

The first part of the course required us to go around the famed 2.2km oval. I was familiar with this part since I previously ran here with my wife twice and my officemates once. I looked at my Nokia Tracker and I was pacing below 6mins/km. Too fast too soon for me, I thought, so I had to slow down to 6:45/km. I'm not familiar with the parts outside the oval so I have to reserve my energy since I have to respect the UP race path to come.

I saw Eric and Team Logan of takbo.ph at the start. I was ahead of them until reaching the Oblation on the 2nd loop. They were pacing well since it was about 3kms to the finish. I decided to pace with them until I had to drop off until the Film Center(?) since I couldn't keep up. With about 2kms to go, I was pacing over 7mins/km. Such is the effect on me of the killer UP inclines.

As I turned back to the Oval towards the finish, I looked at my Nokia Tracker and noticed 53mins and averaging 6mins/km.

Well, as I looked into the distance of the Nokia Tracker, it dawned on me that this is possibly not true:

It was short by over half a kilometer. I heard the Logan guy at the finish said his Garmin registered it "short of a kilometer" which could mean it was only 9kms. If my average pace was at 6mins/km, then if the distance was at 10kms my time would've been around 63-64mins. But that's STILL a big improvement on my 68mins 10k PR.

That night I was still thinking about the race distance so I looked again at the race-route flyer, my Nokia Tracker Distance Map ran, and Google Maps. I think I was able to find the missing 0.55kms (or more). If you look at the scanned map below from the organizers, the path encircled in RED was the path we never passed based on my Nokia Tracker. On Google Maps, it accounted for 300meters, if we ran through that path and turned around the same way as in the race map even for just 1 of the 2 loops, then that would be 600meters. Or 0.6kms ---a little over the missing distance that was needed to complete 10k. 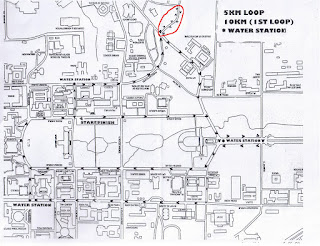 Oh well. Be it 57mins or 64mins, they are still both PR-beating times. Yey!

The AS parking lot was filled with sponsor booths as I reached the finish line. Nice giveaways like juice, a water bottle, granola bar, a small pack of cheezy chips, and a sample tablet for those "namamanhid ang pakiramdam" days. There was even a booth offering free massage. Nice!

Before I went back to my car I finally introduced myself to the takbo.ph racers there. It was nice to meet Eric, Pinky, and Quennie. Nasindak ako sa Team Logan so I never got to formally introduce myself (baka maubusan ng Ingles kase, hehe). Hopefully next time.

My next race? Probably Hataw Pilipinas in UP again. P150.00 lang reg-fee which is not very common nowadays.